[Coming 11/13] A Better Way to Associate Activities to Deals

On November 13, the way you associate your sales activities with your deals is getting a major upgrade. From that point forward, you'll have the ability to choose which notes, emails, calls, and meetings roll up to a deal timeline --- rather than having every activity automatically do so. In this article, we'll walk you through why we're making the change and how it works.

The power of the deal timeline in HubSpot is that it puts a 360-degree view of that deal in one place. To do so, it automatically pulls each and every activity from records associated with the deal. That’s incredibly powerful. But, as our users have brought up time and time again, it can also be incredibly overwhelming. Why? Because not all contact and company activity should be associated with a given deal.

Here are a few quick examples:

1. Activities are pulled into the deal from the associated company that do not relate to the contact associated with the deal. Example: A CSM logs a check-in call on the company record. Unrelated to the deal, but logged there anyway.

2. If a contact has multiple deals, activities are pulled into the deal from the associated contact that do not relate to that specific deal. Example: your sales team is working three separate deals within a company, and one stakeholder is peripherally involved in all three. Certain activities are involved in one deal versus another. But they’re logged on all three anyway. Unrelated to the deal, but logged there anyway.

3. Activities are pulled into a deal from the associated contact and company after the deal has closed (lost or won). If the user goes back to the deal a couple months later, it is impossible to figure out which activities helped close the deal or were related to the closing of the deal. Unrelated to the deal, but logged there anyway.

With this update, you can select which records an activity should be associated with when you log it. Your deal timeline, with only the information that relates to that deal.

When logging or executing an activity on a contact, company, or deal record --- leaving a note, writing an email, making a call, logging an activity, creating a task, or scheduling a meeting --- you’ll have a new association bar to work with: 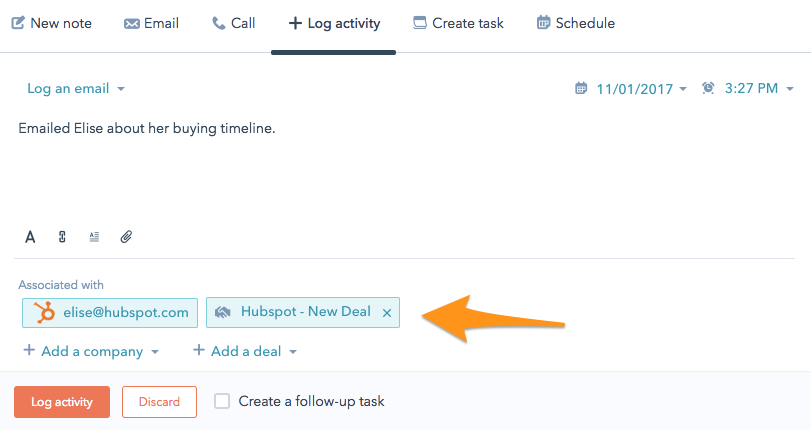 The tags in this new association bar denote where the activity will appear. If you associate an with the contact “elise@hubspot.com” and the deal “HubSpot - New Deal,” this email will only appear in the timeline for those two records. Using the drop downs and X icons, you add and remove records that are associated with the record you are currently on. If you don't want a certain associated deal to include the email on its timeline, simply X it out.

And as an added bonus...

With the change, the deal properties "Last Activity Date" and "Last Modified" will now update based on activities associated with the deal from contact and company records. Previously, these properties only updated when activities were logged from the deal itself.

This new way of associating activities will go live on November 13.