[In beta] A New Way to Measure Your Marketing Campaigns

Moving into beta testing today (Sep 26) is a brand new way to analyze and compare your marketing campaigns in HubSpot that tracks their impact across the full lead lifecycle, from first touch to closed won and beyond. In this article, we'll walk you through the backstory, the tool, and the next steps.

(p.s. If you'd prefer a video to a blog post, here's the quick rundown) 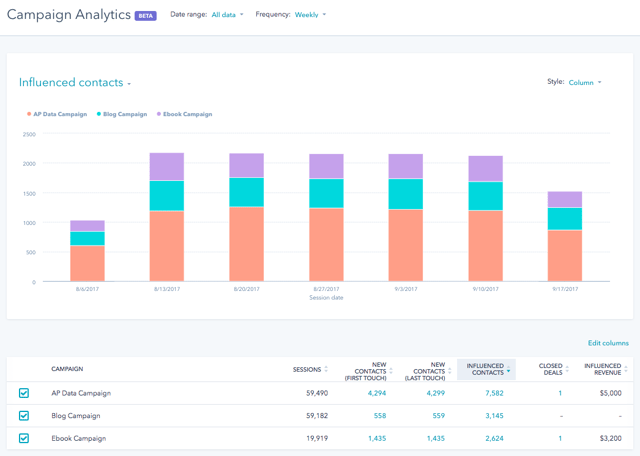 It’s the end of the month. Your company is ecstatic, because the revenue goal was hit. But --- like usual --- the sales team is getting the high-fives, the end-of-month beers, and the bonuses. Nobody ever gives marketing the applause when things go well, but they're fast to dole out the blame when things don't. Why does that always happen?

Your work makes a huge impact on the growth of the business. But the harsh reality is this: making an impact is meaningless if it can’t be measured. A slide with traffic metrics from your web analytics tool, another with lead gen numbers from your forms or marketing automation tool, and a third with revenue data from your CRM aren't enough. No amount of handwaving can overcome disconnected data.

It’s time to give your marketing team the credit they deserve.

With HubSpot campaign reporting, you can connect even your widest-reaching initiatives to the metrics that matter most to your business’s bottom line: traffic, conversions, and --- most important of all --- revenue.

Take the guesswork out of your marketing results, and prove to your company how much real value your marketing campaigns produce. And who knows? Next month, the bonuses and beers might just come to you.

Back up a second. What's a campaign?

A campaign is, quite simply, a marketing initiative. Whereas the topic cluster methodology and its associated HubSpot tool (Content Strategy --- read all about it if you haven't yet) are aimed at structuring your website for long-term SEO success and web authority, campaigns are more focused initiatives designed to boost you towards your marketing goals. They're generally focused on one persona and a single message or theme, and geared to drive a specific conversion. And, in almost every instance, they involve multiple assets.

Here's a quick example, from our own experience. In early September, we ran a campaign called Four Days of Facebook. It was a time-bound initiative --- you guessed it, four days --- with a specific and measurable goal around lead generation. It focused on a single concept: the world of social has changed, and your business needs to catch up. It wasn't aimed at long-term growth; that's what our pillar page on Facebook marketing and its associated subtopic pages are for. Rather, it was a short-term push, with a specific goal in mind.

The campaigns tool in HubSpot lets you group all the assets related to a campaign, so you can manage and analyze them together. For Four Days of Facebook, we tagged each asset (landing page for registration, emails, social messages, blog posts for promotion, etc.) with the same HubSpot campaign. As you run your campaigns in HubSpot, you should do the same. 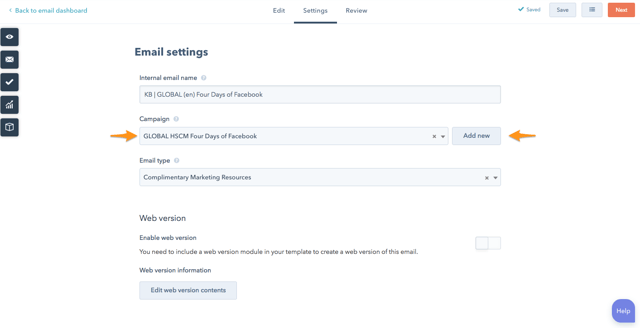 How should we think about measuring campaigns?

No matter what type of campaigns you run, you should be measuring their success at two levels.

First, from a high level, what big picture impact did your campaign have? Did it hit the goals you set out for it? How many leads did it generate (if that was your goal?) How many existing contacts engaged with it? How much total traffic did it drive? How much revenue did it influence? How does that compare to other campaigns you've run in the past? These are the metrics you'll share with the rest of your organization.

Once you've got the view from 30,000 feet, it's all about comparing and optimizing the individual assets within the campaign. Which landing pages had the highest conversion rates? Which blog posts took off? Which emails were opened most?Which social messages drove the most engagement? These are the metrics you'll use to optimize your campaign strategy in the future.

Okay, so what's the new tool?

Today's beta launch is all about gauging the big-picture impact of your campaigns. It's a brand new screen in your HubSpot portal that looks like this: 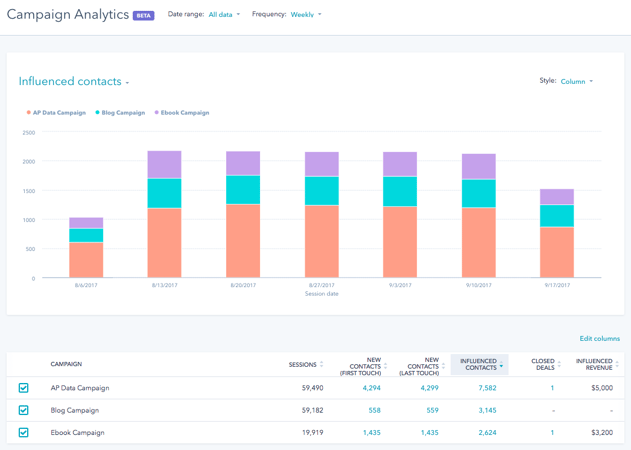 Here's a quick rundown of what you'll see:

Want the technical nitty-gritty on these metrics? Read through this handy help doc.

What's the state of the new screen?

The report is currently in beta, available to all current Basic, Professional, and Enterprise Marketing Hub customers. If you've been a part of a software beta program before, you're aware of the caveats. If not, here's the gist: as the first users into a new tool, your feedback will help us to craft it into its final form. Along the way, it'll change more often than fully launched features, and you might come across more hiccups than you're used to.

With that out of the way, if you're interested in checking out the new campaign analytics report, head to Productivity > Campaigns, and use the opt-in box in the lower-right to activate the new tool.

A quick note, before you dive in...

When you first enter the new report, you might notice less data than you expect to see. The new metrics started accumulating on September 1, and will capture data for any new campaigns you create moving forward.

Today's beta release is all about the big picture. That's a huge piece of the puzzle, but it doesn't tell the full story. In the coming months, another new screen will come your way: a brand new campaign detail screen that breaks down the micro-metrics of the individual assets in a campaign. Think: landing page conversion rates, blog views, social interactions, email open and click rates, and more. If that sounds like something you'd be interested in, activate the big-picture analytics screen today, and you'll be the first to know when the detail screen rolls out.

Don't let us stop you. Head over to your Campaigns now.