What is it?
The Deal Forecast Widget has been updated to give sales people a more complete picture of their current deals, and gives managers easier access to controlling their team quotas.

Why is it important?
Your Sales dashboard should quickly inform your day to day activity within HubSpot's software. At a glance, you should be able to see how your team is currently doing, where they are projected to be, and what changes need to be made to get them there. The old Deal Forecast widget had complex logic to determine which deals were included, and when the quota bar appeared. A deal stage would only appear in this widget if the weighted total of that stage was greater than 5% of the total forecasted value of the deal stage quota. Even if the deal stage did not appear, the forecasted amount of deals in that stage still contributed to the forecast provided in the top left of this widget. This logic was confusing, and ultimately made it more difficult to find value in this report.

This update simplifies the widget while also making it more comprehensive, so you can spend less time determining how our reports work, and spend more time closing deals. It also makes it easier to find the quotas you have set for your team by moving them all to Deal Settings, ensuring that you don’t lose track of your quotas by moving or deleting the widget.

How does it work?
On your Sales Dashboard, your Deal Forecast widget will now show all deal stages, and all deals will appear so long as they have an amount associated with them, and their close date falls within the timeframe specified on the dashboard.

Where you set your monthly quotas for individual members of your team has also been moved to Deal Settings. You can access this by going to Settings > Sales > Deals, or clicking the ‘Set Quotas’ button directly on the Deal Forecast widget. 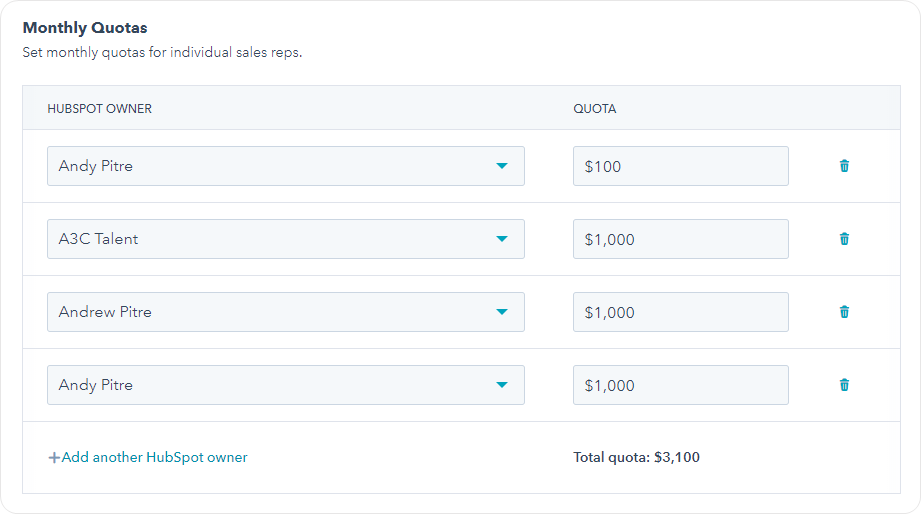 Who gets it?
This is now live to all users of the HubSpot CRM.

What language is it in?
All languages supported by HubSpot.