It's now easier than ever to import leads from Salesforce into HubSpot! Introducing Salesforce Campaign Import - a new way to import some or all of the lead and contact records you have in Salesforce to HubSpot.

Previously, an initial sync of HubSpot and Salesforce would require you to download a CSV file of leads and contacts from Salesforce, and upload them into HubSpot. Now, it's as simple as a few clicks in HubSpot, and it takes mere seconds to bring your lead and contact records over. Once in HubSpot, the records you imported are automatically kept in sync (changes to those records in either Salesforce or HubSpot are pushed to the other system.) No CSV files necessary.

It's important to note that this particular feature is a batch import process that makes it easy to pull in leads and contacts to HubSpot when you choose to do so.

Want to give it a try? If you have access to HubSpot Contacts and are using our Salesforce V2 connector, simply go to Contacts > Lists > View Imported Files, and click Import Campaign. You'll have the option to import all of your leads and/or contacts from Salesforce, or pull in just a Salesforce campaign of specific leads and contacts. We'll also generate a static list of these leads and contacts to make it easy for you to surface what you've imported from Salesforce at any time in the future.

In conjunction with our Salesforce Sync Lists feature, there are now more options than ever to control which contacts end up where between Salesforce and HubSpot. 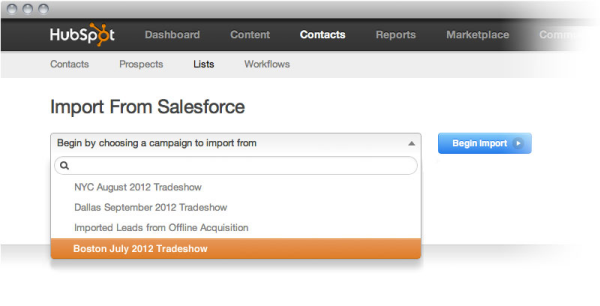 Now Available: An All New HubSpot Intelligence View in Salesforce

As a marketer, making the right information about the leads you generate available at the right time is a crucial part of what you provide to your sales reps. With the right details about your leads close at hand, your sales team can have r...