This morning, we released our third State of the Twittersphere report, which shows a significant decline in the growth of Twitter users but also indicates the average Twitter user is more engaged. 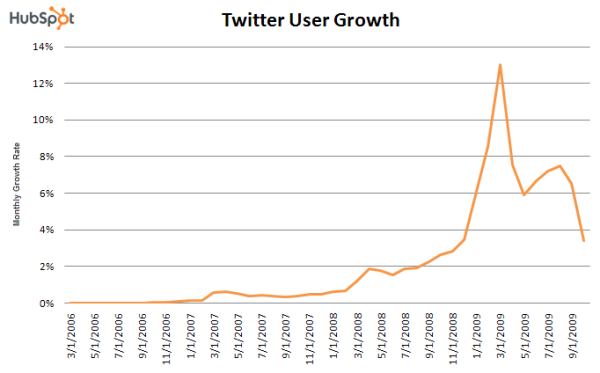 The report discusses that Twitter user growth slowed from its peak of 13% in March 2009 to 3.5% in October.  While 3.5% is considered successful growth for most Web applications, it's still quite a drop from Twitter's March growth.  In addition, Twitter is also experiencing a decline in traffic to Twitter.com, as reported by ComScore, Quantcast.com and Compete.com.

Although Twitter's growth may be slowing, the average user appears to be more engaged than before, as is apparent from the following changes:

The January 2010 State of the Twittersphere reports growth rates as calculated using the account creation data from over 5 million Twitter accounts.  This data is platform agnostic -- it is the same regardless of the application the user uses.  In contrast, measure of traffic on Twitter.com does not include the considerable use of Twitter via third-party applications such as TweetDeck.

State of the Twittersphere author Rick Burnes will also be discussing the reports findings in more depth as well as some of the ways businesses are using Twitter in a free webinar on Thursday, January 21 at 1 p.m. ET.

Click here to download the full January 2010 report. You can also read past State of the Twittersphere reports from July 2009 and December 2008.

Register for the free webinar at http://www.hubspot.com/webinar-how-businesses-are-using-twitter.

Please use hashtag #SOTwitter when discussing the report on Twitter.