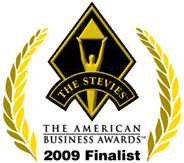 This morning, the Stevie Awards publicized its finalists for the 7th Annual American Business Awards.  I am pleased to announce that HubSpot was named a finalist in two categories -- New Company of the Year and Computer Software, for which HubSpot's Twitter Grader and Website Grader are both finalists.

HubSpot is competing against the following companies for New Company of the Year - Aster Data Systems, Carpio, Evolve IP, Jivox, Mazooma Inc., uTest, and Zuora.  HubSpot's Twitter Grader and Website Grader are up against entries by Blackboard Inc., Epicor Software Corporation, and Volusion in the Computer Software category.

More than 2,600 entries from companies of all sizes and in virtually every industry were submitted for consideration in over 40 categories for the American Business Awards.

Members of the Awards' Board of Distinguished Judges & Advisors and their staffs will select Stevie Award winners from among Finalists in final judging that will continue through June 3. Finalists were chosen by business professionals nationwide during preliminary judging in April through early May.

Stevie Award winners will be announced during the annual gala on Monday, June 22 at the Marriott Marquis Hotel in New York City. Six-hundred executives from across the U.S.A. are expected to attend.  The ceremonies will be broadcast on radio nationwide by the Business TalkRadio Network and hosted by Cheryl Casone of Fox Business Network.

For a complete list of HubSpot's past award wins, check out http://www.hubspot.com/internet-marketing-awards.