MIT Honors Mark Roberge With 2010 Salesperson of the Year Award

We're pleased to announce that HubSpot's VP Sales Mark Roberge was recently honored as the 2010 Salesperson of the Year by the MIT Sloan Sales Club.  Mark received a unanimous vote and is the first person to receive this award for harnessing the MIT Sloan MBA for sales leadership, achievement and excellence. 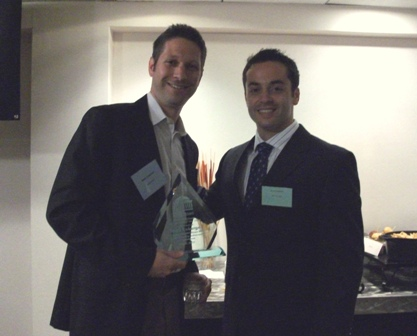 Mark was honored at a VIP reception hosted by the MIT Sales Club on May 6, prior to the MIT Sloan School of Management Sales Conference, which is now in its 4th year.  The goal of the conference was to promote thought leadership in sales through the combination of MBA students and industry executives.

The Salesperson of the Year Award was created based on feedback from last year's conference, where attendees suggested the Sales Club select an industry player who has exhibited the power of an MBA in sales. Because sales is increasingly focusing on analytics-driven decisions, the MIT Sloan School has made more sales-centric courses available to its students.

As VP Sales, Mark oversees HubSpot's entire sales function, having grown the department to over 50 reps and 2,500 customers in just 3 years. Prior to HubSpot, Mark founded and held executive positions in startups in the social media and mobile sectors, after starting his career as a technology consultant with Accenture.  Mark holds an MBA from the MIT Sloan School of Management where he was a semi-finalist in the 2005 MIT $50K Business Plan competition and was awarded the Patrick McGovern award for his contributions to entrepreneurship at MIT. Mark has been featured in the Wall Street Journal, TechCrunch, and other major publications for his entrepreneurial ventures, and he is a regular speaker at MIT and various industry conferences on the topics of inbound marketing and sales 2.0.

Mark accepted his award with a short speech on why sales is shifting from intuition to intuition combined with analytics.

Congratulations, Mark, and thanks to the MIT Sales Club for recognizing him as a leader in sales!