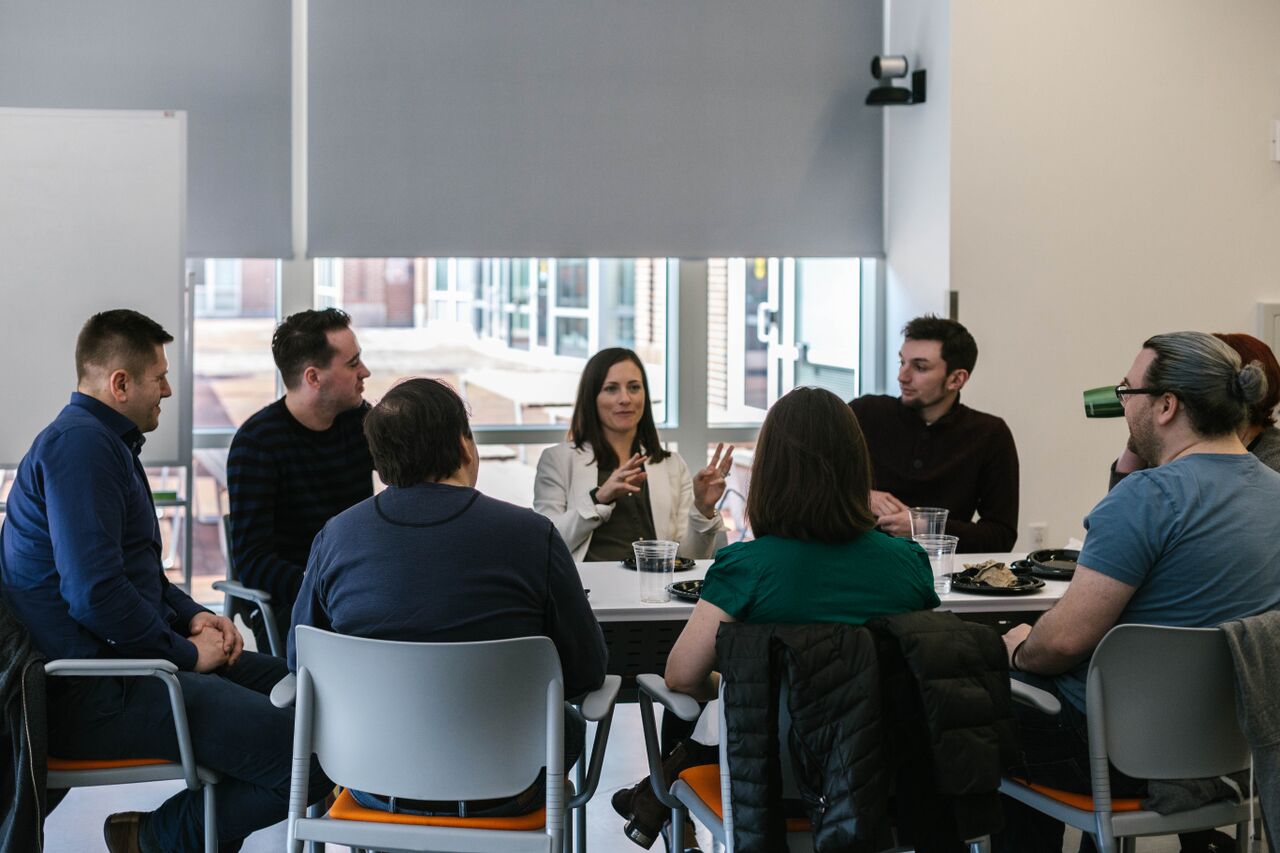 I’ll never forget the day HubSpot became a public company. Not only had we made it from a small office in Cambridge to the New York Stock Exchange, but I was six-months pregnant at the time of our IPO. Through a professional and personal lens, the day was surreal to say the least, especially since my journey from interning to bell-ringing was full of zigs and zags.

I joined HubSpot as an intern seven years ago. I was unsure what I wanted to do after business school, unsure what a career could like for women in tech. So, if you had told me I would one day become our VP of Operations and be expecting my second child, I never would have been able to imagine it adding up.

Unfortunately, the diversity gap in tech means most women today still can’t see it adding up. We’ve all heard there are more people named John running companies than there are women in leadership positions (New York Times, 2015). We see the odds against us and wonder: Can women become leaders at work and in their personal lives? I believe, yes. In fact, I know we can. I work with and learn from women every day who have built careers alongside families, personal passions, and side hustles. They are living proof that it can add up.

For me, the answer has been to build an operating system for work/life balance. Leading HubSpot’s global operations team, I think in data, processes, and project management. There are a million moving pieces to any project, at any given time - being able to strategically juggle, plan, communicate, and react is critical. I’ve realized that same thing can be said for being a parent.

There’s no average day for a mom, there’s no silver bullet to being an amazing parent, and raising kids is the hardest juggling act of all. Sometimes it just feels like there aren’t enough hours in the day between running a team, sitting on a board, and growing a family. But the operating system and strategies that work at the office have actually helped me build an operating system that works at home, too. Here are four themes that I believe have helped me grow my career and my family:

The best thing you can do for your career growth early on is to raise your hand for the projects nobody wants. When the opportunity came up to move into an ops role at HubSpot, I knew it was going to be a grind initially - numbers, data, and reporting were daunting for me at the time. But I’ve always believed in having “good anxiety”.

You learn the most when you’re a little uncomfortable and flexing a new skill set. I’ve always looked up to HubSpot board member Lorrie Norrington because she’s a master at this. She has perspective, depth, and experience in everything from recruiting to economics. So I grinded it out and volunteered to solve meaty problems where I didn’t totally feel qualified to do so, like remodeling our sales comp plan and rolling it out globally. “It” is still referred to as the “Elworthy Plan” internally, and I think about that from time to time when I’m overwhelmed at work, or at home.

It’s tempting to take the easy way out or be complacent in your job. But that’s not an option when you become a mom; you have to do the dirty work, you have to show up every day, and you have to do the hard stuff. Parenting is the hard stuff. I think having a thick skin for challenges, failure, and focusing on the end goal, instead of on the ‘thanks’, is equally important in growing your career as it is in growing a family. Building up that muscle up can help you do both.

Planning for No Plan

I’m a planner through and through. Nothing makes me happier than deadlines, road maps, and spreadsheets. Then I went into labor 7 weeks early. I learned the hard way that you can’t prepare for everything. My maternity leave plan may have gone out the window overnight but it didn’t matter; the only thing I needed to worry about was my son. We spent weeks in the intensive care unit and HubSpot made it easy to focus on him and nothing but him.

I feel so lucky to work with employees and a leadership team who went out of their way to support me and my family when we didn’t have a plan or stability. And even though I’m still a planner at heart, that tough time taught me to take a deep breath when things don’t go according to plan at work. There are going to be setbacks, mistakes, and oversights; having perspective has helped me respond and react more gracefully.

Many people I work with and admire are extroverts. They are naturals at commanding a room, delivering a keynote, and voicing their opinion in meetings. I, on the other hand, have always been an introvert. I’m naturally shy; leading with force will never be second nature to me. But there have been times (and many more to come, I’m sure) when I needed to push back on my colleagues and stick to my guns even if it wasn’t always the popular decision.

That’s why no leadership style is, or should be, exactly the same. I knew I’d never be the loudest person in the room, but I’m a data-head, and data speaks for itself. Over-communicating the facts, sharing data before, during, and after a meeting, and being transparent is more my style than pounding the table. And that style spills over into my operating system at home, too.

I lay out the schedule at the beginning of the week for my husband and our nanny so we can all stay on the same page. If there’s a chance something could come up later in the week or month, I put it on their radars sooner than later. Communicating early and often and being transparent with one another keeps our family engine running.

If spending time with your family is a priority, or spending it on your side hustle or a personal passion, then you need to create boundaries in your schedule. I leave work at 5:30PM every day, give or take a few days a month if there’s an event or hard-to-schedule meeting on the calendar. I (mostly) don’t check my email from 6PM to 8PM during the week or on weekend mornings.

Building that schedule was easy to do in practice; HubSpot is a truly flexible workplace. Employees can work from home, take unlimited vacation, and create schedules that work best for them and their teams. If you need to leave at 3PM every Tuesday to take a yoga class you love, do it. Flexibility wasn’t an issue, but I had a tough time getting comfortable with being unavailable. I was worried about slowing my team down and holding them back from making an impact.

But I quickly realized it’s not so hard once you get into a routine. Creating patterns, like leaving at the same time every day or being offline every Sunday, is key for getting into a groove that works for you, your team, and your family. If you respect your boundaries, the people who work with you will, too.

For International Women’s Day this year, we’re celebrating the achievements and boldness of women like Alison around the world who are pushing the envelope for diversity and inclusion in tech. Visit hubspot.com/iwd to join the celebration.