It's been a big couple of weeks for us here at HubSpot, moving into our new (bigger and better) office, moving HubSpot TV to a brand new set, and having our first guest co-hosts on the show!

Check out the photos below to see some behind the scenes shots from HubSpot TV in the new digs. Look out for: 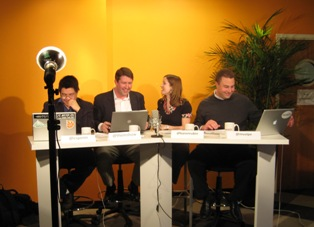 This past week's episode featured our first-ever guest co-hosts, Christopher Penn and John Wall, who are best known (together) for their marketing podcast, Marketing Over Coffee, which they record every Wednesday at 5:30AM from a Dunkin Donuts just outside of Boston. The episode was lots of fun - full of jedi jokes and good debate about good and evil marketing tactics. One twitterer even called it "a geeky version of "The View".

Tune in every Friday at 4pm EST to watch HubSpot TV LIVE and catch up on past episodes by subscribing in iTunes.