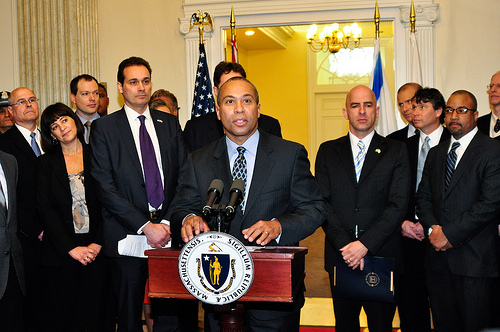 Last week, the office of Massachusetts Governor Deval Patrick announced that Governor Patrick and a coalition of Massachusetts' leading business executives and senior government officials will take part in the Massachusetts Innovation Economy Partnership Mission 2011 to Israel and the United Kingdom to explore growth opportunities within the Commonwealth’s innovation-based industries. The mission will take place between March 7 and March 17, and we're pleased to confirm HubSpot's participation in the delegation!

As a member of the delegation of business executives, HubSpot CEO & Founder Brian Halligan will join the mission in an effort to evangelize Boston as the next generation Madison Avenue as well as a hub for innovation, entrepreneurship, and the budding startup community.

"I'm a passionate advocate of the Massachusetts innovation economy and am very excited to be a part of this mission," said Halligan. "I think it will be hugely beneficial to the Commonwealth in emphasizing on an international level the advantages of Boston -- and Massachusetts as a whole -- as a powerful center for entrepreneurial and innovative activity. Attracting more international interest has the potential to create more opportunities for jobs and growth."

The mission plans to focus on business expansion, job growth and collaboration during industry forums, company visits, and meetings with Israeli and UK business leaders and government officials in Tel Aviv, Haifa, Jerusalem, London and Cambridge.

HubSpot has always been an active evangelist of Massachusetts' innovation economy, particularly emphasizing Boston as the hub of marketing innovation. A supporter of and participant in such important initiatives as FutureM -- a weeklong series of events that focuses on the future of marketing -- as well as independent marketing events and educational sessions, HubSpot is a dedicated member of the local tech and entrepreneurial communities.

Click here to read the full press release announcement of the Innovation Economy Mission and view the full list of delegates.

View the on-demand webinar and learn how to transform your marketing, develop your strategy, and take your business to the next level.