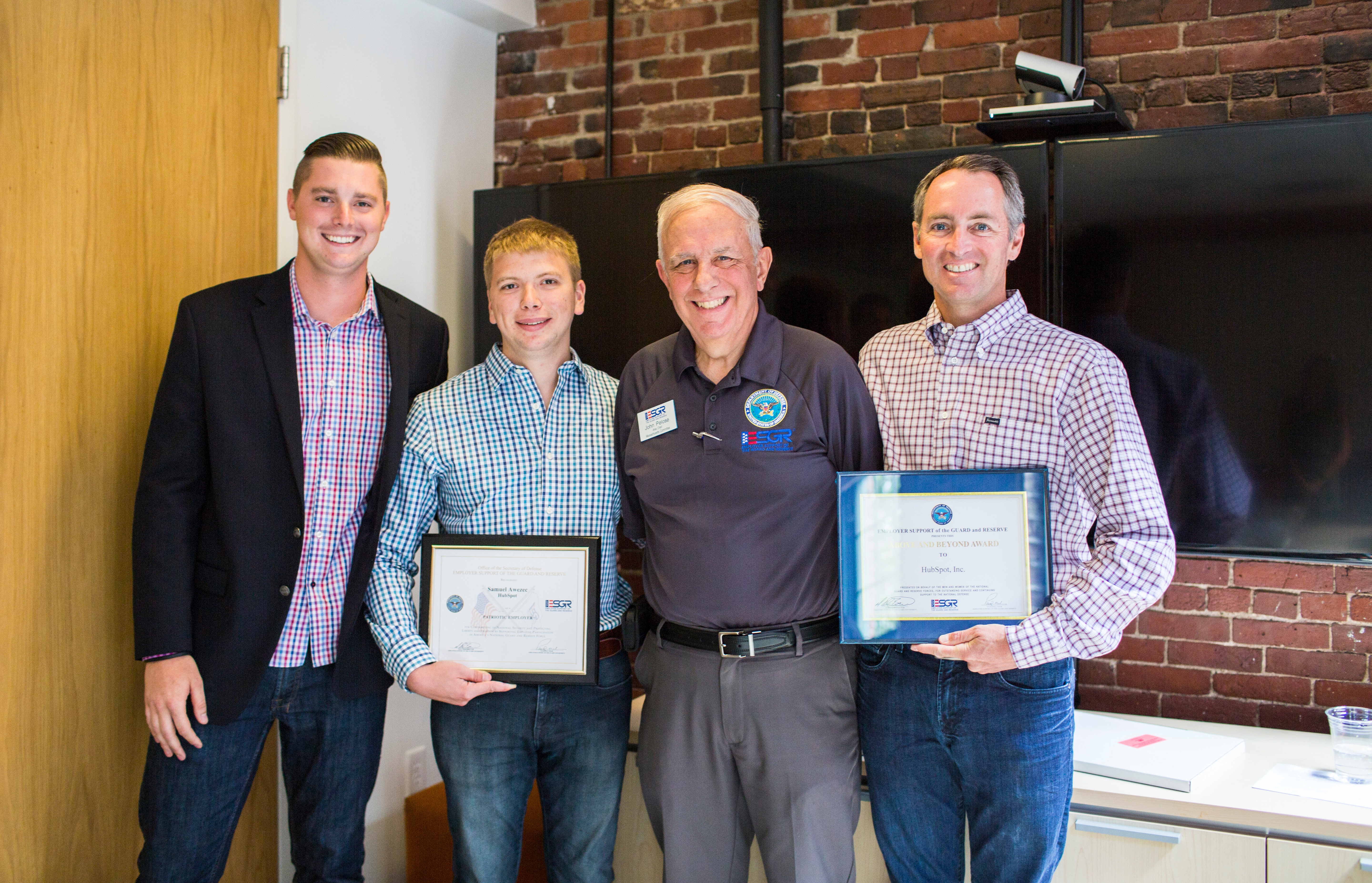 HubSpot is proud to accept two awards from the Employer Support of the Guard and Reserve (ESGR), an agency of the Department of Defense.

HubSpot was honored with the Above and Beyond Award in recognition of the company’s support of employees who serve in the National Guard and Reserve. Additionally, Sam Awezec, HubSpot’s Product Specialist Manager was honored with the Patriot Award for his direct support of David Kracirik, a Senior Product Specialist and Commissioned Officer of the Army National Guard.

The Above and Beyond Award recognizes employers at the local level who have gone above and beyond the legal requirements of the Uniformed Services Employment and Reemployment Rights Act by providing their Guard and Reserve employees additional, non-mandated benefits such as differential or full pay to offset lost wages, extended health benefits, and other similar benefits. Similarly, the Patriot Award reflects the efforts made to support citizen warriors through a wide-range of measures including flexible schedules, time off prior to and after deployment, caring for families, and granting leaves of absence if needed.

David shared a bit about why he chose to nominate Sam and HubSpot for the Awards saying, “I nominated Sam for the Patriot Award because of his outstanding service and support to myself and the National Guard. Without his continual support, I would not be able to have the freedom like I do to serve in the National Guard. HubSpot also fosters an amazing culture in where I can do my duty without any fear of negative repercussions to my civilian career.  I truly would not be as successful today as I am without Sam, or HubSpot.”

Earlier this week, HubSpot welcomed John M. Pelose, the Area Chair for the Massachusetts ESGR, to our Cambridge headquarters for a formal presentation of the awards to Sam and the company. HubSpot’s General Counsel, John Kelleher accepted the ‘Above and Beyond’ Award on behalf of HubSpot. Kelleher is a military veteran, having served as a Lieutenant in the U.S. Navy, based in San Diego, where his tours of duty included deployment to the Persian Gulf during Desert Shield/Desert Storm.

“The Patriot Award and the Above and Beyond Award were created by ESGR to publicly recognize individuals and American employers who provide outstanding patriotic support and cooperation to their employees, who like the citizen warriors before them, have answered their nation’s call to serve. Supportive supervisors and employers are critical to maintaining the strength and readiness of the National Guard and Reserve units,” said Earl Bonnett, ESGR Massachusetts Chair.

Of receiveing the honor, Kelleher said, "I am very proud to accept this award on behalf of HubSpot and I am proud of the work that we do each day to make HubSpot an inclusive and supportive workplace for all people, especially those who have chosen to serve of country. As a veteran myself, this honor is incredibly meaningful."