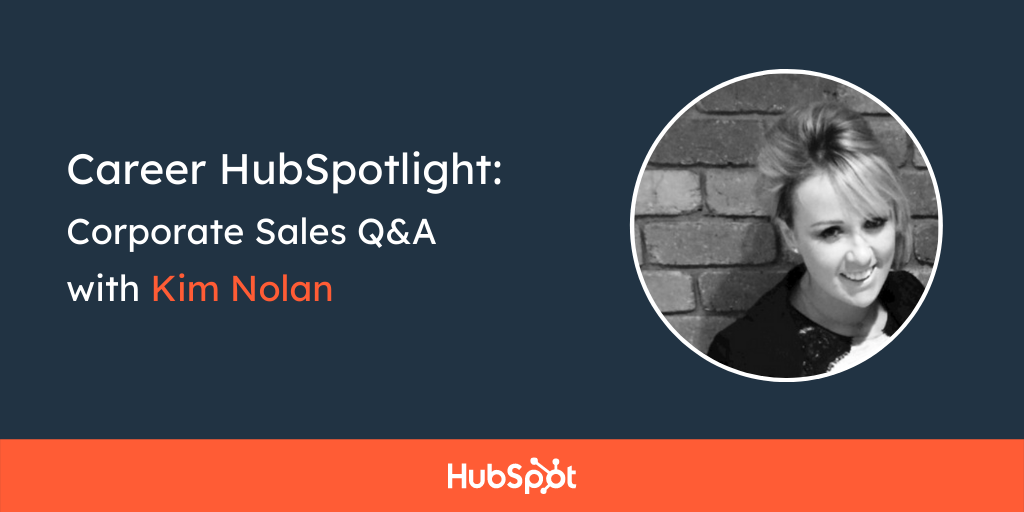 Meet Kim, a Corporate Account Executive on the UK & Ireland (UKI) corporate sales team at HubSpot Dublin. Joining HubSpot in 2021, Kim brings over 10 years of sales experience with her to the corporate sales team and spends her days helping HubSpot’s enterprise customers grow better. Prior to HubSpot, Kim studied Urban Planning, lived around the world and worked for two other tech companies.

In this Q&A, Kim dives into the world of corporate sales, sharing her tips and best practices for success and talks about her experience as a woman in sales. Here’s what she had to say...

Can you tell us a little about your background and journey to HubSpot?

I joined Hubspot in late 2021 after feeling like a post-pandemic change from my previous role at another CRM company. Previous to that, I spent 5 years in sales in an app development company in Sydney. My educational background would not give you any clues as to how I ended up in tech sales! I have an undergraduate degree in urban planning and a Masters in Business. I spent my 20s living abroad in New Zealand, New York, London and Sydney. It’s great to be back home in Ireland but still get international exposure working at a company like HubSpot.

What does a typical week in your role look like?


It really varies! I work in the corporate sales space in the UKI market, where I work with existing HubSpot customers and also help prospects evaluate HubSpot’s products too. You’re always learning about different businesses which keeps it interesting but you’re also doing demos, working with partners, and learning from your peers. There is a lot of autonomy in the role which is great so you can decide where to focus your efforts.

What skills are necessary to succeed in your role? What’s the most rewarding part of your role?


The most rewarding part of my role is getting to speak to such a variety of people, companies and industries, which makes every day so different and interesting! There are no two projects the same so the role never gets old.

What is the most challenging part of your role?


As most people in sales will say, it is a competitive industry with people placing high expectations on themselves. A career in sales is a marathon, not a sprint, so you have to remind yourself of the longer play at times and not focus too much on the losses - everyone in sales has them!

In your opinion, why is now a good time to join HubSpot?


I’ve worked for a mix of large corporations and small growing businesses, so I’ve seen both sides of the coin, but it does really feel like HubSpot is at the cusp of an exponential growth phase! I’ve never seen career opportunities like there are at Hubspot - promotion paths are clear, transparent, and most importantly, attainable. It’s rare that you would stay in the same role for years on end.

What makes the culture at HubSpot unique?


The flexibility and autonomy you have at HubSpot is fantastic. The term “you’re the CEO of your own territory” is often thrown around in sales, but at HubSpot, you really do have the freedom to shape your role while also having great support from the wider internal team.

What advice would you give to someone looking to pursue a career in sales at HubSpot?

Other than that, I would say we’re big on consultative selling and solving for the customer, so a customer-first mentality is really important.

Sales is still a traditionally male-dominated industry, what advice would you give to other women pursuing a sales career?


I’ve been in sales for 10+ years now and often on all-male teams. I like to look at it as an area of opportunity where you can bring a unique set of skills or a different sales style. People often have a perception of sales that you need to be pushy and overly confident. This is definitely not the case in tech sales! For example, empathy is a really sought after skill in sales in the move to a more consultative sales approach.

If you weren’t a Corporate Account Executive, what would you be doing?

If you're interested in learning more about a career in sales at HubSpot, visit our career page.