How We Fixed a Critical Bug in HubSpot's Culture Code

Culture has gone mainstream, in a good way.

The more we talk about culture, the more we can think critically about it. It’s no longer enough to just say you care about creating a company people love. If organizations truly want their people, business, and community to grow, we have to walk the walk. We have to not just build culture, but iterate on it over time.

We’ve gone through dozens of iterations of the HubSpot’s Culture Code since it was published a few years ago. At the time, I was asked (politely) to think about this “culture stuff” by my friend, co-founder and HubSpot CEO Brian Halligan. (Which was ironic because as a severe introvert, working on projects pertaining to humans doesn’t exactly come naturally.) We realized that employees felt there was something special about working at HubSpot.

Figuring out that “something” was the hardest thing I’ve ever worked on in my career.

I spent hundreds of hours talking to employees about culture and getting feedback on what they do, or don’t, love about HubSpot. The product of all those conversations, research, and late nights is our Culture Code. It’s a manifestation of what we value and what gets us out of bed in the morning. Today, the deck has over three million views on SlideShare and is a top reason candidates say they want to work at HubSpot.

What most people don’t realize though is that the ‘code’ in Culture Code doesn’t mean handbook or a ‘code of conduct’. It means actual code. The kind of code you’d write to build software. As a programmer, I believe building culture is a lot like building a product. First, just like with product you need to talk to your “customers”. In the case of culture -- the “customers” of the culture are the people that work in the company. Next, just like product, you need to iterate on your code constantly. And even then, the best products are always a work in progress.

Not too long ago, I found a bug in our Culture Code that needed fixing. We use the acronym HEART to describe qualities we value in our coworkers. For years, these qualities were: Humble, Effective, Adaptable, Remarkable, and Transparent. But something wasn’t right. HEART did not clearly capture one of the values that I think is fundamental and part of our core at HubSpot.

That value is: empathy.

In this day and age, I think empathy is more important than ever. As we scale our company, what will differentiate us in the future is what has differentiated us in the past: We fundamentally care about our customers and each other.

So, in hopes of making empathy a core value, up-front-and-center, I proposed replacing ‘Effective’ with ‘Empathy’ in HEART. By sharing the idea on HubSpot’s internal Wiki and encouraging employees to share their feedback, HubSpotters confirmed that ‘Empathy’ was the right move. We also got some strong ideas for future revisions to the deck to make sure we don’t lose ‘effectiveness’ completely. (I think Flora on our Sales Engineering team put it best in her Wiki comment, “People are more likely to bring their authentic selves to work if they know their co-workers are accepting and empathetic. That in turn will build the environment where people can be the most effective!”) 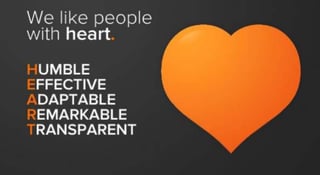 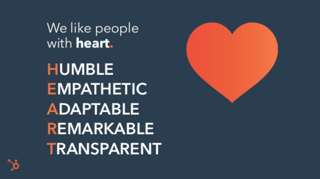 Fixing this bug in HEART reminded me how important it is to open source culture. Like in product development, the more developers you have contributing to code, the more likely you are to catch bugs, and to find even better ways to build a great product. As we’ve grown to over 2,000 employees across seven global offices, the Culture Code’s been updated over 30 times (and counting) thanks to their feedback and contributions.

That’s why, as HubSpot celebrates HEART Week, I want to thank the HubSpotters, customers, Partners, and our community, who make the new ‘E’ in HEART possible. By being empathetic, you push us as an organization to do the same.

And, as we keep finding bugs in our Culture Code, we’ll keep fixing them.