A couple summers ago, I took an improv comedy class with a colleague using HubSpot’s tuition reimbursement. (Yes, HubSpot actually paid for me to laugh in a class.) But, beyond learning to laugh at life, I also learned another important skill -- public speaking.

Before every improv class, I’d get sweaty palms and have to pep talk myself into even showing up because I was so nervous. Most of my jokes that landed a laugh or giggle were stories about my new (cute) terror of a puppy pottying on my kitchen floor.

One warm-up exercise we’d do as a class was a game called ‘Yes, And.” Character #1 makes a statement to establish the setting and the plot. Then Character #2 chimes in with “Yes, and...” to accept the scene and build upon it.

This game didn’t allow for editing, re-dos or perfectionism. (I’m a recovering perfectionist, so trust me, it’s harder than it sounds.) You just had to keep taking risks and writing the story.

That improv class made me laugh, made me take risks, and made me be more vulnerable. That class couldn’t have come at a better time, because I was about to face my biggest career risk to date.

In 2015, I had the incredible professional opportunity to move across the world to start HubSpot’s third global office in Australia. It was another risk, albeit a much bigger one than showing up at an improv class. But, I remembered the lessons I’d learned in the class and the importance of taking risks to continue growing in my career. So, without further ado, here are 3 important lessons I learned from that improv class that have allowed me to take risks in my career.

Saying ‘yes’ is not always convenient. (But, it’s worth it.)

Are you ever really ready to start a new job? Or move across the country, or get married, or train for a marathon or become a parent? If I waited until I truly felt prepared for everything, I’d never do anything but nap and watch Netflix.

When the opportunity to move abroad surfaced, I just couldn’t let it pass without giving it a shot. After much discussion, my boyfriend and I decided to go for it. We had planned on getting married later in the year, but we decided if I got the gig, we’d get married before we left.

So, I spent about 15 hours one weekend working on a presentation and interviewed on a Monday. By Friday, my new manager told me I got the job. Queue the crazy happiness! The next three months were the happiest of my life. We got engaged, planned our wedding, married in 99 days and made plans to move abroad together for my job. Our best friends helped us pack up two apartments in a week and we had beers on my front porch the night before we left. We honeymooned in Fiji on the way to our temporary home in Australia.

Planning a wedding in three months and apartment shopping with a 16-hour time difference was not convenient in the slightest. Preparing for a new job in one of our international offices, while also doing my existing job was not easy. But still, saying ‘yes’ to all of that wasn’t in my plans, it was better.

Growth happens outside of our comfort zone.

During my time in our Sydney office, I managed the launch of our Japanese blog and website. For the first time in my professional life, I worked every day with people who spoke English as a second language. Not only that, we worked exclusively over video call because our translation agency was in Japan and I was in Sydney. I’m a girl from the cornfields of Indiana. This was uncharted territory, and the experience taught me to problem solve. It taught me to get cozy in the uncomfortable because that’s where you learn. That’s where you grow.

There’s truth in the graphic below that to thrive, you need to be somewhere between your comfort zone and the ‘danger zone.’ In your comfort zone, you’re doing projects and exercising skills that you already know how to do. In the danger zone, you feel out of control and panicked so you don’t have the mental space to actually learn. In between those two areas is the sweet spot. 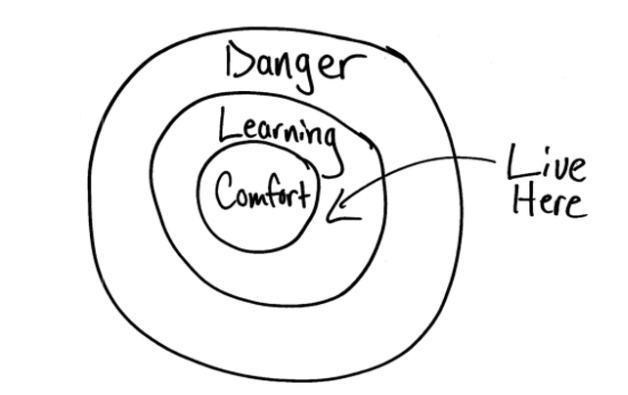 You don’t have to see the finish line to start the race.

That weekend I spent 15 hours preparing for the job interview for the Sydney role, I had absolutely no idea that this career opportunity would overflow into so many other good things. Those good things weren’t only career growth for me, but also personal growth for my family. Caleb (my husband) had never been out of the country before this move. My parents, my younger brother, Caleb’s parents and three friends also got passports to visit us in Australia.

Now is the time in your life to take risks, to say yes. It doesn’t matter your age, or where you are in your career. Waiting until you’re ‘fully ready’ to take a risk, means that it’ll never happen. You don’t have to know the outcome to simply just start. Yes, risk is almost always uncomfortable and inconvenient. But, the growth and learning you’ll get will be 100% worth it.