Episode 2: How Sales Leaders Should Approach the New Norm 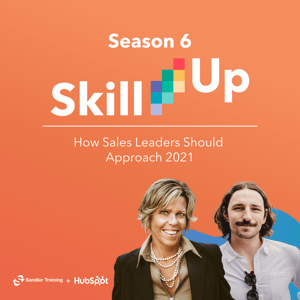 Sales leadership is a difficult job in general. Especially in the middle of a pandemic. But at the end of the day, sales teams are still responsible for driving new revenue growth. So how should sales leaders approach 2021?

Suzie Andrews, CEO of Stark Associates (Sandler Training licensee), talks through how sales leaders should approach thew new norm and how sales reps can grow into the best sales leaders.

Read: Here's What Sales Leaders Should Prioritize in 2021 According to a Sandler Expert

If you want to make the jump from sales rep to sales leader, you’ll likely find out that what made you so successful as a rep is likely not what’ll shake out to a successful leadership position. What you need is some coaching.

Suzie’s been in sales for 18 years. She started as an associate under Ken Stark, and she’s now been a franchisee for six and a half years. Suzie works with presidents and CEOs and sales organizations who’re focused on growing the sales side of the business and recognize that they've got gaps they need to change or improve.

Sales this last year meant moving quickly and adapting. Some of the changes we’ve seen are the new norm. From here on out. So Suzie tells us how sales leaders should approach 2021.

BROWN: So Suzie, we interviewed over 500 sales leaders back in October of 2020, and 46% of them said they missed sales targets last year. I was hoping we could start off with maybe what message would you send to those sales leaders right now?

[ANDREWS: Most of them have to decide for themselves what their mindset's going to be, and they have to get really clear that it's their job to be strong and set a strong foundation and a very strong message about what's required. So that's the first piece and what's required is that sales leader. And that I'm always going to bring in the president and CEO, they have to do it together and aligned, they have to clearly define and look at well, where are we today in terms of the past and how we w what we were tracking and measuring are those the right things moving forward. And if they are really clear about what you expect your salespeople to do day in and day out, we call them behaviors. It's the Sandler concept of a cookbook. Build your recipe for success and define it very specifically. Set the tone and the expectations track and measure it.]

BROWN: Yeah, and as more teams are now moving to remote selling as a result, how do you change your motivation tactics?

[ANDREWS: You can't motivate somebody unless you understand them. Everybody thinks they dangle the carrot, the money, the incentives, and that's going to motivate.

It's not that most salespeople aren't money motivated. But they're driven somehow internally. One, I'm going to just sort of reinforce, you do have to be doing the one-on-one with people. You've got to be spending the time to touch base and find out how people are doing and go back to their personal goals and make sure that you're keeping them visible, asking them what's changed because there are things that have changed with people through COVID a recognition that my family is more important than ever, and they're spending more time with their family and.
So realigning to what you're seeing might be changing in what's important to them and understanding what that is. The other is contests are good and make them fun. There are lots of creative ways to make them fun.]

BROWN: To sort of continue on this shift to remote work, how did you or a client’s leadership style change this year?

[ANDREWS: We really believe that sales managers and sales leaders need to get aligned and together with us to actually, again, what the heck is the strategy and where do we have gaps? Because most don't recognize the holes. And typically the holes fall into a couple of really big areas. The first is planning. They don't have standardized territory plans in the sales plan.

So every sales rep working from their own gut or what they get up to do every day. So typically we start there, right. We help them develop that structure and put that planning process in place. And then we teach them how to execute them as a manager. How do you coach it? How do you hire to it? How do you hold people accountable? How do you go on a ride-along all of those things that will make them be effective in that role?

One of the presidents that I worked with an introverted guy really didn't like the people side, very empathetic, but never showed it. And there was a quote I had years ago that I had input on his computer to read every day.

"People want to know that you care before they care what you know."
That was kind of an invaluable message for him, that he really had to ingrain in his brain and put some behavior behind. So he got out of his desk every day and he would go walk the halls. He'd never done that. He would have a list of every day and every week.

Whom was he going to just reach out to, to say hello and stroke in some way? And it has completely changed the culture of the organization and his effectiveness as a leader. He is seen as a true leader because people see him as caring and people see him giving the right direction.]

[ANDREWS: We believe if there was a pie chart in front of me or behind me, um, that sort of showed the various, um, roles that a sales leader or a sales manager plays. It's, you know, supervising, coaching, training, hiring, recruiting, and interviewing and mentoring. The biggest piece of the pie should be coaching because most people think it's supervising.

People supervise themselves when they're motivated and they want to hit their goals. They want you to coach them, be behind them, support them, develop them. So we spend a tremendous amount of time working on helping managers be better coaches. And that means they need to be better listeners and they have to go out of the mode of telling people what to do. Nobody likes to be told what to do.

So we teach them how to learn, to ask questions and use questions, to help people self discover, and take ownership of what they need to do. So it's a, it's a really holistic approach to developing the leader, to be able to develop. Effectively the people on their team.]

BROWN: I think how you mention becoming a better coach, it’s really so important. Because a top sales leader and a top sales rep are very different. How can you distinguish a sales leader from a high-performing rep?

[ANDREWS: That's one of my favorite questions and it's actually probably the most rewarding thing I've done in my job, my role. I've had several salespeople that I have had the opportunity to help identify potential within them, with their president and CEO, and move them up in the organization. So the first is they have to be people that are motivated and hitting their goals, right. They have to show and prove success.

You have to have a clear, defined profile of where you would see them moving so that they can see that that's where they'd want to go. We help companies build that hiring profile. Then what you do is you evaluate them, you take those assessments to see do they have what it takes, and if so you put them into training.

So I've worked with my oldest client. Um, so I'll tell a quick story was a sales guy. And his name's Jamie Morris. I'm going to call him out from international companies. And he was a sales guy that they wanted to move into sales management. So I spent the first three years with him just working with him to get structure in place, engage teams, start to hold people accountable, built him and coach him into being able to manage.

So over the last several years, he has progressed from a salesperson to a sales manager, to a VP of sales. It was the senior VP of sales. And now he is the general manager over the division that he was involved in. And he's got several managers under him and inside sales, outside sales. It's such a great story, but it's constant ongoing work and development. RIght?]

[ANDREWS: Thanks a lot.]