Over the past ten years, LASIK eye surgery has evolved from a cutting edge treatment once considered a luxury to an affordable, low risk solution for vision correction. The number of LASIK providers worldwide has grown dramatically, with many offering the service at a deep discount.

Chesapeake Eye Care’s LASIK division is known as one of the top surgical centers for LASIK in the Mid-Atlantic region and the practice is recognized for its exceptionally high patient success rate. Because they have chosen to compete on quality (the experience and track record of their surgeons) and not price, the Center was finding it increasingly difficult to attract the right kind of patient in a highly saturated advertising environment.

They turned to Quintain Marketing to develop an inbound marketing strategy, aimed at raising awareness about LASIK and emphasizing its impact on patients’ quality of life. Most importantly, they wanted a solution that would make it easy to track the results of their campaigns and measure the ROI of their marketing spend overall.

Quintain worked closely with the team at Chesapeake Eye Care to develop a complete inbound marketing campaign focused on LASIK surgery. They started by defining the buyer persona for the Center’s LASIK services and developing a campaign that would appeal to the young and active demographic they were targeting. In addition to writing several articles and an eBook on LASIK eye surgery, they partnered with an online influencer to develop a multimedia inbound campaign that would tell the story - from start to finish - of what a patient experiences with LASIK and how their life changed as a result. 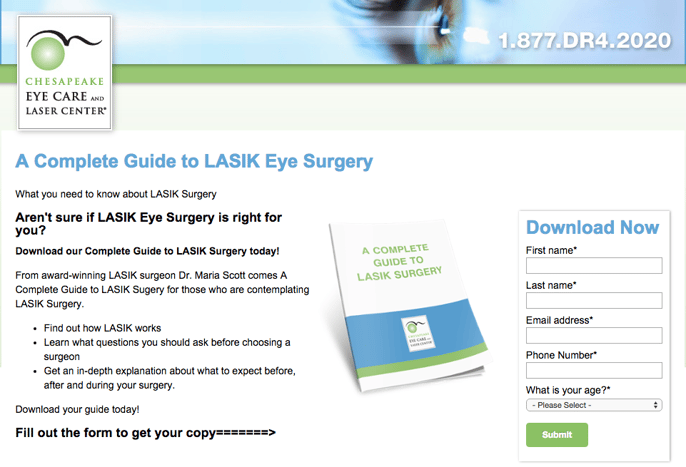 The influencer identified to resonate most widely with their target audience in the Mid-Atlantic region was a local meterologist, Justin Berk.

These blog articles were published on the CEC website and shared on both theirs and Justin's Facebook pages. They were designed to tell a story about what patients experience with LASIK. The reaction of Justin’s audience was immediate and positive, with many of his followers indicating that they had been considering LASIK and asking for his feedback. As part of the campaign, Chesapeake Eye Care offered Justin’s followers an eBook on LASIK surgery as well as an exclusive discount if they booked a procedure.

This hugely successful campaign was managed by Quintain Marketing and executed using HubSpot's all-in-one marketing platform. They started the campaign by using the Blogging app to publish Justin's stories about his LASIK experience. Next, they used HubSpot's dynamic Email app to promote these stories and realted offers to Chesapeake's audience. The Social Media app was used to promote the campaign content across a variety of popular social channels such as Twitter and Facebook. Lastly, all of the campaign activities were organized and tracked through the Campaigns app within HubSpot and leveraged their tracking URLs capabilities.

In the first four months since the campaign was launched, it has generated over 16,000 landing page views and 165 leads. So far, 57 leads have scheduled a consultation, 14 patients have scheduled or completed a surgery. In addition to generating leads and new sales since adopting HubSpot in late 2013, Chesapeake Eye Care’s overall website traffic has increased by 81 percent year-over-year.

The analytics available in HubSpot have given the marketing team at Chesapeake Eye Care the information they need to adjust the company’s marketing spend according to where they're seeing success and notable results. They're now looking forward to the next chapter in their inbound marketing playbook, as they collaborate with Quantain on new campaigns for additional products and services.

Taking Care of Marketing with HubSpot

Care.com is the world's largest online marketplace for finding and managing family care, with more than 11.8 million members, spanning 16 countries. Its mission is to improve the lives of families and caregivers by helping them connect in a reliable and e...

Freezing Out the Competition

Giving the All-Clear to International

50% Decrease in Cost Per Lead