When Marcela Ureta, Marketing Manager at MaxSea International, first started in 2012, she was unable to measure the success of her online marketing efforts. She did not have the tools in place to give her the insights needed to understand who was coming to the different landing pages on her website, whether or not they were converting to sales leads, or how many new customers she was gaining as a result of her digital marketing activities.

Following the traditional processes in place, Marcela was sending batch emails through Outlook and MailChimp using contact lists that were nearly ten years old. Bounce rates were extremely high because the lists were outdated. As the majority of email databases decay at a rate of 25% each and every year, Marcela knew she needed to start replenishing her list, and fast, or else face serious marketing consequences.

Additionally, the content on MaxSea International’s website did not seem to resonate with her audience, as per a high bounce rate. The content that she had to work with were outdated press releases from partners and media. These articles were not relative to their customer’s interest in the navigation industry and were seen as unoriginal since they had had been published by a 3rd party on the wire.

Marcela knew that she needed a change and began searching for a tool that could measure her marketing efforts and that would help her create fresh new content that was compelling to her customers. Enter HubSpot...

MaxSea International Gets Started with HubSpot

After learning about the inbound marketing methodology and reviewing some of HubSpot’s tools, Marcela was convinced! As she got started with HubSpot, she began to reorganize her marketing and communication strategies. With the help of her consultant, Marcela established SMART marketing goals for MaxSea International to which she began to strive towards. SMART marketing goals stand for goals that are: Specific, Measurable, Attainable, Realistic, and Timebound.

One early stage of her strategy that was a critical element in becoming for efficient with her time, was creating a publishing schedule for her social media channels and company blog.  For example, she created plans to publish one blog post per week on each of their two blogs with original content, tweet 5-7 times a day with industry-rich content, and post on Facebook once a day.

Marcela then began to create landing pages using HubSpot templates and easy to use drag and drop form builder. These landing pages allowed her to connect the dots between content she created and the point of converting website visitors into leads. In addition, Marcela took her lead gen efforts one step further by utilizing HubSpot’s smart forms, which enabled her to automatically gather a different subset of information the next time an existing lead came to a landing page on MaxSea’s website. By gather more information overtime about her leads, Marcela was able to build more robust profiles of her contacts and use those insights to better understand their unique interests.

Keeping their contacts lists organized was a top priority for MaxSea, which made HubSpot’s smart lists and smart form functionality an essential part of their strategy. Marcela was easily able to set criteria to segment her database with targeted smart lists, allowing her to send personalized marketing communications to her various audiences. Sending the right message, to the right person, at the right time increased the likelihood her customers engagement and as a result she saw a dramatic increase in email open rates.

MaxSea also utilized workflows to keep leads engaged over time through triggered emails in a logical sequence. For example, one of her leads downloads a guide called The Ultimate Guide to Boat Rentals. After five days, she set the workflow to automatically email her lead with a related article on boating to keep MaxSea top-of-mind. Then, if they opened that email and clicked into her boating article, she triggered another guide (this time with a promotional offer attached). MaxSea has found success with this strategy evidenced by conversion rates on these boating guides ranging between 21-31%. 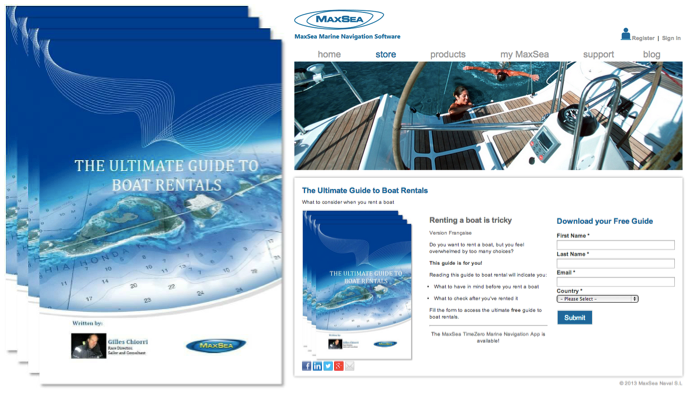 MaxSea International, worldwide developer and distributor of software for maritime markets, was founded in 1985 along with the sister company MapMedia, specialized in electronic charting. MaxSea International offers a wide range of products for both recreational and commercial sailors sold in more than 25 countries on five continents.

9% Increase in Leads in First 3 Months

Holsteiner Races Ahead With HubDB

Increased Customer Base by 400%