Building a company through inbound marketing

Like many other early-stage companies, Ometria began developing their business through old-fashioned networking, emailing and calling their contacts to identify prospects and generate leads for their fledgeling business. However, with ambitious growth plans, the team needed to implement a marketing strategy that was scalable, efficient and maximised their limited resources.

Ed Gotham, Head of Demand Generation, began exploring cost-effective ways to market and generate quality leads. Online research led him to the HubSpot blog where he read about inbound marketing, a methodology that immediately resonated with him as the right solution for Ometria. Ed explains, “As a small start-up, with limited resources in terms of time and money, inbound made sense.”

While Ed evaluated a number of other marketing automation providers, including Marketo, he ultimately chose HubSpot because “HubSpot had the feature set that was most relevant to inbound marketing… and Marketo didn’t really impress me, particularly with their design… HubSpot was the logical choice.”

Ed and the team got started using HubSpot in November 2013. Given that they hadn’t begun selling their product offering and were in the pre-revenue stage, their entire marketing strategy was built from scratch on the inbound marketing methodology.

Their first goal was to start building up brand awareness amongst their target market. Ed and the team began blogging using the Blogging platform in the HubSpot marketing platform on topics that resonated with their target market such as ‘How to Calculate Customer Lifetime Value in eCommerce'. They also created Landing Pages to convert the traffic from their blog into leads. 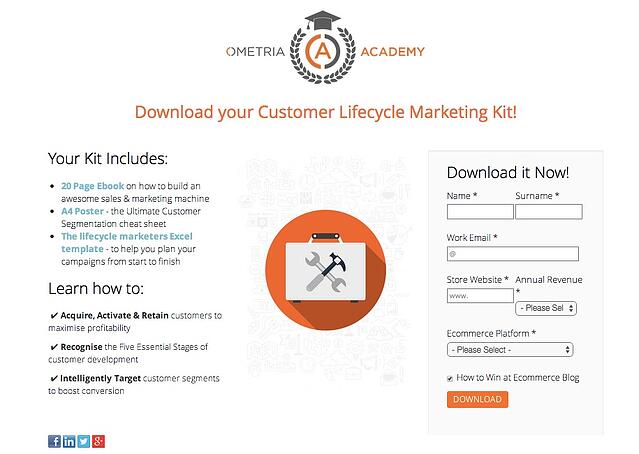 Very quickly, Ometria had built up a sizeable database and were in a position to start using the Email Marketing tool in Marketing Hub. The larger their database became, the more targeted their approach became. Ed says: “As the lists built up, we starting using segmentation to tailor our messages to our prospects.”

Over time, as the business has grown, Ed and the team have leveraged some of the more advanced features from the HubSpot marketing platform such as Smart CTA’s and progressive landing page forms. Using the Analytics tool, the team can identify what's working well and what needs improvement. They leverage this information to continuously tweak their strategy and improve results. The scalability of HubSpot's software has suited Ometria perfectly. Ed says “we have used different features in a staggered way as the business has matured and our needs have evolved.”

From Ed’s perspective, HubSpot has been the right choice for Ometria because “it is focused around building profiles of your prospects and customers and progressively improving that information so that you can target them with highly relevant marketing.”

Exceeding expectations in the first year

HubSpot has helped Ometria accelerate the growth of its business beyond expectations. Within the first year, they increased traffic to their website by 368% while leads increased by 558%. This, in turn, has translated to a 60% growth in revenue.

The fact that inbound marketing was engrained in their internal culture from the get-go has been a key factor in their success. Ed explains “employees are taught the importance of great content and getting it in front of the target market. They start writing blog posts early on and slowly we move into bigger projects such as eBooks.”

The simplicity and all-in-one design of HubSpot’s software has enabled the team to deliver their strategy efficiently and effectively. “We now have a system to easily manage the marketing strategy, report on what’s working and refocus as needed.”

Put simply, Ed loves HubSpot because “HubSpot is your fast track to getting more leads.”

Ometria is a predictive analytics and marketing platform developed specifically for retailers. Since its launch in 2013, Ometria’s mission has been to make retail marketers more data-driven. Today it lets hundreds of retailers leverage data to acquire better customers and keep them purchasing more through creating, executing and constantly optimising a customer lifecycle marketing programme.