19X increase in GuavaBox leads from organic traffic in 2013

24% increase in DoInbound leads from organic traffic past 5 months

One of the main objectives for the marketing team at GuavaBox and DoInbound is to capture as many qualified leads as possible to get into their customized sales track. When they started using HubSpot in 2012, the team was eager to learn inbound marketing and grow their business. They quickly discovered that content creation was going to play an integral part of their online marketing strategy to generate leads.

They use HubSpot's SEO and Keyword tool for conducting research on terms and topics to create content around. Next, they easily post content using the Blog tool, which tracks keywords as they work by alerting them anytime they're using a keyword which they're trying to rank for. Alongside creating a variety of call-to-actions buttons, they have great offers on their HubSpot Landing Pages, such as their "B2B Marketing Checklist," where prospects can download digital marketing resources.  When visitors fill out a form on either the Guavabox or DoInbound website, they get entered into the marketing database inside of HubSpot and are added to Smart Lists.

Once on the HubSpot Smart Lists, Dymski is responsible for following up with all the DoInbound leads, and his colleague, Brandon Jones, takes ownership of Guavabox leads. Divvied up, their process involved three steps from that point:

On average, they were spending 2.25 and 3 hours every month on manual lead management with the two systems. "That's just too many steps, too much time to worry about that," Dymski said.

Zapier Improves Efficiency Getting Leads Directly Into the CRM

In order to cut out the first and second steps, and to get qualified leads, they needed to connect HubSpot to a CRM. To do so, GuavaBox first gave Salesforce.com a try because of its known HubSpot integration. But it wasn't a good fit for their three-person team. "It was just too complicated, too expensive, too murky for us," Dymski said.

That's when Dymski discovered Zapier, a tool he learned could connect HubSpot to more than two-dozen CRMs. So they went searching for the one that would best fit their needs.

"We tried out a bunch of different applications, from Podio to Pipedrive to Highrise," Dymski said. "(It was) a matter of playing with CRMs to figure out who had the best interface to handle the data from HubSpot and then also handle our sales process."

After a six-week trial-and-error period, Base CRM surfaced as the top choice for Jones at GuavaBox. But for Dymski at DoInbound, Nimble turned out to be the CRM that worked best. And thanks to Zapier, the company could use them both with one HubSpot account. 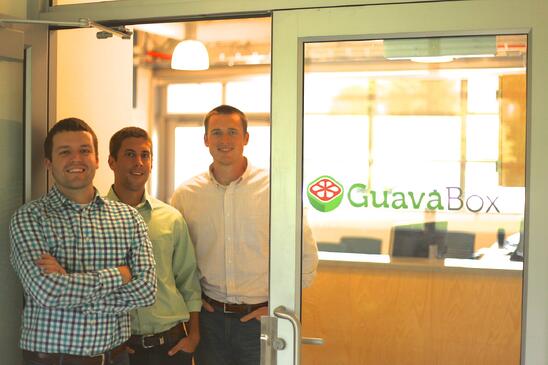 How Integration Has Impacted Time Resources

As a three-person shop, Zapier’s most pronounced effect on the team’s use of HubSpot was in the number of hours saved. Dymski estimates the Guavabox has been able to 100 hours hours of time that would be spent manually importing and coercing data into different systems. This time saving has been a result of the 400% cut in lead review time after the integration. Zapier has also provided them the freedom to choose the software that fits their needs best to complement HubSpot, not just the software that could integrate with HubSpot.

GuavaBox is a website design and inbound marketing agency that partners with clients to grow their business by driving qualified website traffic through search and social channels, converting traffic into leads through value-adding content, and nurturing leads to a sales-ready stage through an intelligence-driven system of automated workflows. They created DoInbound, an inbound marketing campaign management tool for inbound agencies who faced similar pain managing client's campaigns.