50% increase in leads from email campaigns

With over ten years experience, Velaro Live Chat is the world's largest chat vendor platform. Prior to HubSpot, their marketing team relied on a major CRM to capture, route and communicate with sales leads. Every single form submission went directly into their CRM without any lead scoring or qualification. This meant that every new contact was being routed to a sales rep and soon enough, their small inside sales team was drowning in unqualified leads. The situation was bad for efficiency and morale. Velaro had both the time and the talent to create quality content but lacked a tool to really make the time investment in a full-blown email marketing campaign worthwhile.

Velaro needed a solution that would allow their marketers to create full scale email campaigns, automate nurturing of less “sales-ready” leads and push those that were ready to talk to sales. They ultimately turned to HubSpot to help improve sales productivity by automating top of the funnel lead nurturing and establish a system of lead scoring and qualification.

The Magic of Workflows and Automation

One of the major pain points for Velaro prior to HubSpot was having a large volume of low or unqualified leads that were pushed to sales. Without a tool like HubSpot, their marketing team was unable to determine which leads were interested or ready to buy their software. The combination of HubSpot's of Lead Scoring and Workflows were not precisely a magic bullet for Velaro, but they came pretty close. Using HubSpot's Workflows app, Velaro accomplished several things which had a cumulative impact of increasing qualified leads by 68%.

1. Personalized content: HubSpot's Workflows app allowed Velaro to funnel leads through the best content and resources for them. This provided Velaro with leads that had a much clearer understanding of what they wanted and how Velaro could provide it.

2. Targeted content distribution: Velaro already had a large library of content resources but they were entirely dependent on links and landing pages making distribution difficult. This problem was compounded by the need to target that content to contacts at the right stage in the marketing funnel. HubSpot enabled Velaro to schedule a range of actions and adjust their timing and order to match their buyer's journey.

3. Well-informed salespeople: Details of interactions on the site and progress through Workflows gave the sales staff a clear image of where each lead was in the sales funnel. This allowed them to reach out at the right moment, focus on the truly qualified and prepared leads, and tailor their conversation accordingly.

Through the power of workflows and marketing automation, Velaro was able to engage with fewer leads but close more deals. "Using HubSpot to nurture and qualify leads has been great for Velaro," says Senior Vice President, Chris Childers. "Since implementing, we have not once heard the age-old 'junk leads' argument from Sales about the quality of the leads they get from Marketing. Plus, the right sales rep automatically gets an alert when a new contact record is created by HubSpot in Salesforce; it’s a tremendous improvement!”

In the past Velaro's marketing and sales team sent email somewhat sporadically and received equally sporadic and lackluster responses. Focusing on ending ineffective email and educating his team on best practices was a top priortiy for Chris.

With HubSpot, email is easily integrated into Workflows and instantly doubled Velaro’s email reach for some content resources. Chris notes the first immediate and noticeable effect of having an automated email campaign was in the “thank you” and “follow up from chat” emails. These automated “thank you” messages had a very high response rate and seemed to resonate with Velaro’s clientele.

After seeing this success, their next step was to produce regular, targeted email campaigns in which they were able to make use of pre-existing content. By repurposing content, Velaro maximizes its marketing efforts and is able to extend its reach to a larger and broader audience online.

HubSpot let Velaro transition from a “sometimes...when we can” email marketing strategy to consistently running full-scale campaigns with virtually zero increase in either time or personnel resources. In less than six months Velaro’s email campaigns yielded a 50% increase in leads over previous efforts, and enjoyed an open rate of as much as 57% for some campaigns.

Looking to the Future with HubSpot and Proactive Chat

HubSpot has helped Velaro further differentiate itself as a leader in the live chat space through its improvements to marketing automation and lead nurturing. They've been delighted with the results so far and have seen increases in both direct and organic leads. Specifically, over the past nine months since August 2014, they've seen a 67% increase in organic leads and 43% increase of direct.

One specific area they're excited to watch grow is their live proactive chat feature. Industry-wide research shows site visitors are 6 or 8x more likely to complete a transaction if you extend a well-timed invitation to chat. Since launching with HubSpot, over a three month timespan Velaro has seen conversions of Sales Chat Form submitted increase 35% and customers who actually started chatting increase 23%. 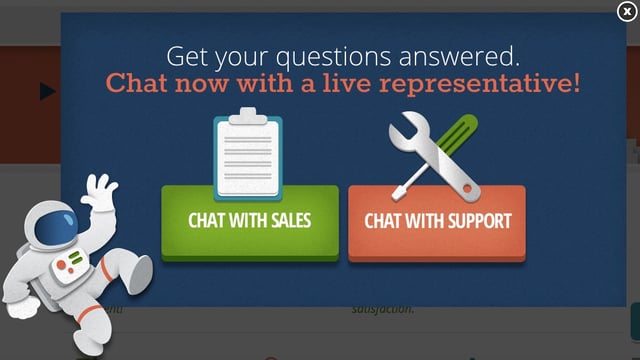 Entering their second year as a customer, there still remains a lot to learn and master. Velaro’s marketing team is excited to have a full year’s worth of ROI data to inform (and justify) its budget moving forward having now the ability to prove value and impact of their marketing efforts.

As a pioneer in the live help industry, Velaro has provided over a decade of leadership in click-to-chat, click-to-call and co-browsing. The company provides a feature-rich, stable and secure live help platform that allows companies to engage with website visitors at the exact time they need assistance. Delivered in the cloud, our "software as a solution" platform is currently deployed on thousands of websites. Clients include Fortune 500 as well as Internet Retailer Top 500 E-commerce businesses