.id The Population Experts are a Melbourne based demographics consultancy in Australia and New Zealand. In 2013, the team at .id wanted to expand their customer base. .id found HubSpot and worked with their partner, Bright Inbound Marketing, to generate new business opportunities through inbound marketing. About
.id The Population Experts

.id is a company of population experts - demographers, spatial analysts, urban planners, forecasters, Census data and IT experts. .id understand how cities, towns and regions are growing and changing. They use spatial data to tell this story in powerful web applications..id share this knowledge with their clients so they can make confident decisions about when and where to invest.

.id have been in business for over 16 years, providing their clients in Australia and New Zealand with demographics data and insights to ensure future planning fits future needs.

With a strong desire to contribute to a more sustainable society, the team had been sharing educational content online that could help inform local planning and decision-making processes.

Traditionally, their client base comprised of local government councils and agencies, but the team at .id knew anecdotally that a much broader audience was accessing and using the content they were publicly sharing. This broader audience included commercial entities that were building infrastructure to create the fabric of the community such as retail operators and housing providers.

When their core government business started to slow down, the team decided to tap into this lucrative existing audience and develop a new business segment. Lailani Burra, Sales, Marketing & Business Strategist at .id, decided to try a new approach: leverage their large library of content to “get people talking to us, not just using our stuff”. She didn’t realise at the time that the process they were about to embark on was known as inbound marketing.

Initially, Lailani and the team focused on redesigning their website to feature their educational resources. They began blogging in the run up to the 2011 Australian census and eventually began to distribute a monthly newsletter to their now sizeable monthly readership. But their efforts weren’t generating the results they hoped for. They were missing the insight on who was accessing their content and why. Lailani explains “we were generating more and more traffic, but we still weren’t generating many leads… so we knew there was a missing piece”. It was around this time in 2012 when she discovered HubSpot and the inbound marketing methodology.

The missing piece of the puzzle …

Lailani saw that HubSpot’s software could help them round out the inbound marketing strategy that they were trying to implement by giving them the tools they needed to convert their website visitors into leads. Further, HubSpot’s methodology immediately struck a chord with Lailani as she felt it was “clean and methodical” and aligned strongly with .id’s own ethos of "being genuinely helpful and sharing content".

However, the team simply didn’t have the time to invest in the middle and bottom of funnel activities they needed to implement. Sam, their HubSpot consultant, recommended that they get in touch with Bright Inbound Marketing, a local HubSpot partner, who could support Lailani and the team to undertake this transformation and reap the rewards.

With help from Bright Inbound Marketing, .id implemented HubSpot in December 2013. The first step was to add the tracking code to their website which would enable them to get a deeper understanding of their visitors and their behaviour on the site.

Next they converted some of their existing pieces of content into eBooks, the first of which was ‘Three Growth Markets in Australia’. They gated this content behind landing pages and forms. As the content is very valuable, they used forms that were quite detailed enabling them to quickly enrich their database. 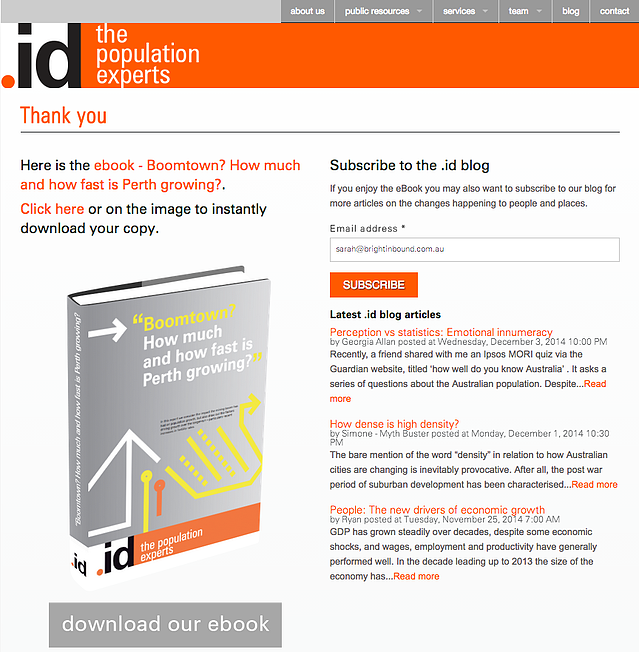 With an enriched database in place, they were now in a position to swap out their monthly newsletter with email marketing that was smartly executed via workflows. Simple follow up emails have proven to be very effective for them. By simply asking “Did it download ok?” or “Did you find what you were looking for?”, they found they got great engagement from prospects. .id were now able to nurture leads to a point where they were sales qualified and suitable for a consultation. Finally, the team were converting their hard won traffic into quality leads.

HubSpot’s integrated analytics tools have been key in enabling the team optimise their marketing activities. They use the tools to understand how each stage of the funnel and each piece of content is performing and identify where they can make gains. Lailani explains that “rather than trying to pack the top of the funnel now, we use analytics to try to improve those conversion ratios”.

To date, the results for .id have been phenomenal. In less than a year, they have increased their website traffic 1.6 fold, from 15,000 to 39,000 visitors monthly. In addition, they are generating between 600-1000 new contacts monthly.

Significantly, their visitor to lead conversion ratios have reached 4% and landing pages are consistently achieving conversion rates of 30% or higher.

HubSpot has helped .id to contact and engage with their prospects. With over 1200 marketing qualified leads, they now have “so much more opportunity that we can chase down, and we’ve had to put on extra resources to do that”.

These gains have all translated into a doubling of revenue for their new ‘.idPlacemaker’ business segment.

Put simply, Lailani loves HubSpot because it allowed them to “leverage the old business to build the new business”. They already had 1 million session users every year and as she explains “that’s alot of people using our stuff. We wanted to leverage that. We needed a mechanism by which to do that, that’s what HubSpot gave us”.